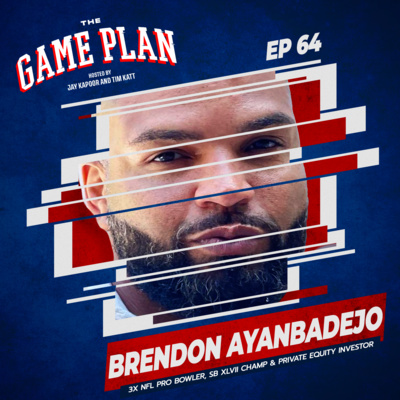 While it's not uncommon to see two brothers make it to the NFL one after each other, this is a first for The Game Plan. We're thrilled to have Brendon Ayanbadejo, the younger brother of Season 2 Game Plan guest Femi Ayanbadejo. Which brother brought more energy and enthusiasm to the show, it's really hard to say so we'll let you make that call!

Brendon knew the NFL stands for "not for long" and started preparing for life after the game much sooner than a lot of his peers. Despite this, he still had a pretty epic 10-year career in the NFL, going from undrafted FA to making the Pro Bowl 3x as a Special Teams maven and winning Super Bowl XLVII.

As he transitioned from the NFL and got his MBA, Brendon helped bring Orangetheory Fitness to his home state of California as a franchisee and developer. He invested a few million as a founding partner of West Coast Fitness which now has over 55+ franchises at the time of a successful exit to a private equity backer a few years ago. As he jokes "Sports is just competitive fitness" and Brendon shares his Pea-Pod Theory that helped him find a problem, passion, and purpose to be dedicated to in his post-NFL career.

Beyond that, Brendon's interests are as varied as the roles he played on the football field. He's passionate about health & fitness tech of course but he pairs that with his love of EV & Battery tech, FinTech across Bitcoin, Ethereum, and other Crypto assets. A few companies he's directly invested in include Tonal, Pathwater, Impossible Foods, Hyperice, aXiomatic, and Rubric and we discuss how he enjoys investing both as a VC as well as a PE investor

As Brendon likes to say "Through the grief and strife, we have the choice to adapt & innovate, or succumb to the powers that be. The underdog that I am, I choose to adapt & innovate." This was an uplifting and inspirational conversation with a former NFLer thriving in his second act.

The Game Plan is a weekly podcast hosted by venture capitalists Jay Kapoor and Tim Katt. The show highlights professional athletes' stories that will help our listeners raise their game both in business and in life

Did you know you can watch, as well as listen to The Game Plan? Check out our YouTube Page for full-length episodes and fun video clips